Mistress Herrin Rose likes to use her feet to punish and that is what she did to this loser today. She cruelly forced him to lick the soles of her sneakers and the poor guy could do nothing about it. He had to do what he had been ordered even though her sneakers were dirty and smelly. Mistress Herrin wanted to show him who was boss and she managed to do it. 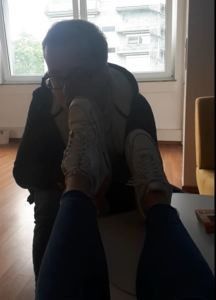 Princess Helen found out that the guy she had contracted to renovate her houses had done so poorly. She was not getting good rent as a result. She was pissed and as punishment for him, she took him to one filthy place he was supposed to have renovated and she stepped on mud and dirt and she made him lick it. She then jumped on him and trampled him painfully.

Mistresses humiliate newbie before allowing her to join their group

This girl wanted to join these mistresses' group. They had stringent rules which one had to satisfy before she was allowed to join them. This loser had to satisfy all of them and she did. The last step was for her to be humiliated and the mistresses enjoyed humiliating her. They forced him to lick their feet, lick their saliva from the floor as well as open her mouth and swallow their saliva. She did it and was accepted into the group.

This mistress and her daughter did not like how this guy tried to seduce them both. They look alike and he thought they were sisters. He was perverted and he had always wanted to try fucking sisters so he thought he could try them. The mistress and her daughter played along and took him home where they tortured him with their dirty feet and their dirty shoes. He regretted why he had approached them.

Princess Mih had sent this guy to fetch her something but he took long and when she went to check on him, she found him stealing from her. She was not going to let him get away with it so she cruelly tortured him using her feet. She used forced foot worship to choke him and to get him to learn a lesson he would not forget in a hurry.

Goddess Melissa was not feeling well. She woke up feeling sick and she asked her slave to make some soup for her. But she made soup that was so bad it made her feel ever sicker. She summoned all her strength and she used it to humiliate him. She did this by forcing him to lick her shoes and her feet. She also kicked him and stomped on him painfully.

Madame Marissa wanted to quit her job but before she did, she went to her boss' office and she humiliated him. She removed his shirt and degraded him. She got him to lick the soles of her shoes and made him do other cruel and crazy things for her own fun. She told him all the bad things he had done to her and to others before she degraded him some more and quit with her full benefits.

Mistress Megan and her friend had never humiliated anyone before. And since they were new in the game, they chose to try it differently. The mistresses got a loser who they paid to endure their punishment and humiliation. He was made to lick their dirty feet, shoes, and socks. They used forced foot worship to have fun at his expense. But he could not say anything as he had been paid.

Madame Marissa did not want to inflict pain on her slave but she had to punish him nonetheless. She chose to use forced foot worship to do it. She humiliated him using her dirty feet and she had crazy fun doing it. She choked him a little as she did it and she had fun seeing how degraded and humiliated he was. She let him go when she saw he could not handle it anymore.

Princess Serena went outside and she came back with dirty feet. She wanted to use those same dirty feet to humiliate this loser. She made him lick her bare feet till they were as clean as they were before she had stepped out. The slave could not believe what she was being made to do but since he did not have a choice, he did it the way she wanted.